KATHY:  I’m currently having some sight problems and I’m scheduled for eye surgery early July.  In the meantime I’m taking eye drops morning, noon and night to get the eye ball in shape.   I tell friends that  won’t know better that I trailed too many sheep too many miles .  But as you and I know I’m just old.  Which is to say it may be some time before I finish my unit history roster .   So I’m sending you a story not exactly Mt Pleasant history but one I like for your consideration.  Page 314 from “Buddie” but attached here with a photo of Jeri.  She is on the right as we look at the photo.  With her the SSA Regional Commissioner , seated,, and Mark Thome and Doris Delcelo.

KATHY: And I should have added  "And Jeri has never sued" >!  lee 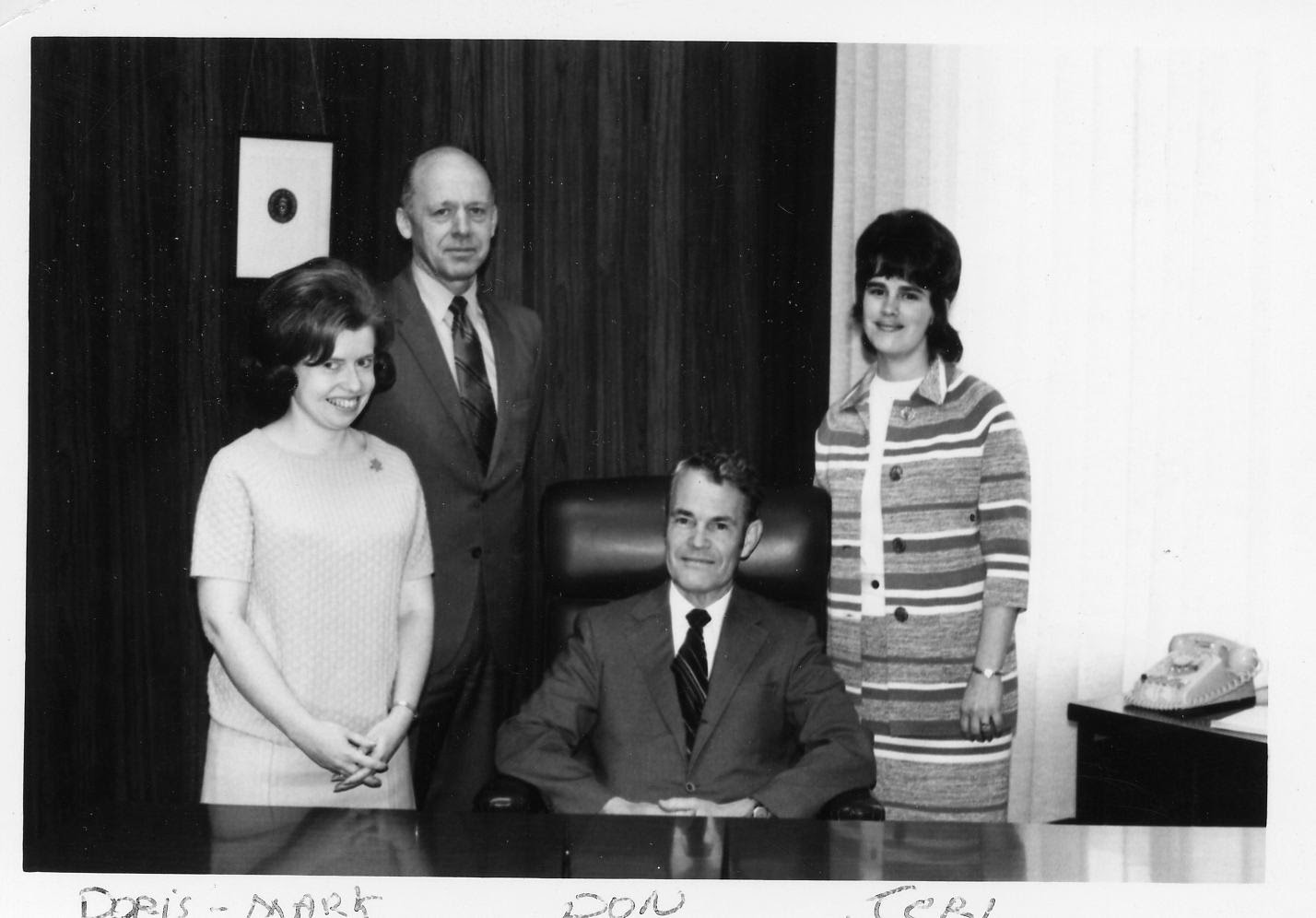 After a high octane introduction during which my retirement title was mentioned—Deputy Assistant Regional Commissioner for Field Operations-I rise and respond.

If I may paraphrase my old friend, Winston Churchill — “Never in the course of human endeavor has so much title covered so little responsibility”-then my Jeri story.

The speakers here this evening have all been talking about Jeri—but I want to talk about Ms. Burgess.

The Seattle Regional Office was an ongoing, but young bureaucratic organization when I reported for duty, October 1970. Because I was at work my first Monday before the Bremerton ferry docked, I was able to spend time comparing baseball careers with the Regional Commissioner. When his gatekeeper arrived, he said, “Let me introduce you to Ms. Burgess. She’ll introduce you around and show you your office.” I met Ms. Burgess. She showed me around. She introduced me to my secretary—a young lady from Bremerton. She showed me my office.

Three or four days later as I was coming out of the Regional Commissioner’s office where we had been discussing the crisis of the moment—where to eat lunch—Ms. Burgess stopped me. “Mr. Christensen,” she said, “you look very handsome in your California casual suit, but this is Washington, Puget Sound, Seattle, and we have our own very distinctive style. Why don’t you drop by Nordstroms, an old shoe store that’s expanding into men’s wear and see if there is something you like. Ask for Mr. Jackson.”

So, in a day or two I dropped by Nordstroms and asked for Mr. Jackson. Turned out he was Senator Jackson’s brother. I introduced myself, and told him Ms. Burgess had sent me. “Oh yes,” he said, “you’ll find your suit right over there on the rack. I went over to the rack. There was just the one suit tagged. “Hold for Mr. Christensen—modeled by Dennis —Selected by Jeri.”

And, Jeri, I am still wearing your suit. Have a long and happy retirement. You’ve earned it.